The first time I met Howard Marks was the summer of 1997, he had come to Portsmouth for the annual Smokey Bears Picnic on Southsea Common.

We had arranged for him to drop in at my house to chat to a reporter from a local magazine before heading on to the picnic.

I asked him if he would be taking any dope to the picnic, “Oh sure” he said in his Welsh accent, “I always have a bit with me, I’m bustable 100% of the time”.

The previous day Howard had been quoted in the local paper as being prepared to smoke cannabis at the picnic. So when we got there a police inspector asked him who he was. “I’m Howard Marks” he said with a big grin. “In that case” said the inspector, “because of statements attributed to you in the press, I am arresting you on suspicion of being in possession of a controlled substance”.

Another copper grabbed Howard’s other arm and they started to march him off the common. This was the first time he had been in custody since being released from his 25 year sentence in a federal penitentiary a couple of years earlier. 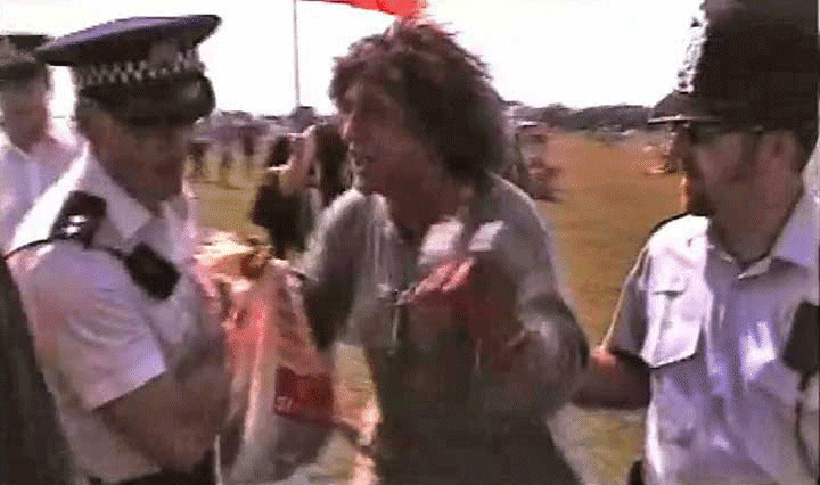 On seeing Howard being dragged off, some of the hundreds at the picnic ran forward and surrounded him and his escort. A police helmet flew through the air as Howard was pulled away from the overwhelmed cops and de-arrested. All of this time Howard had not stopped grinning, he loved every minute of it.

Soon more cops arrived and Howard was back in custody. They took him to a van, searched him, didn’t find the hash and released him shortly afterwards.

Next day it was all over the press. Good news for the picnic and good news for sales of Howard’s autobiography Mr Nice, which had been in the bestselling lists since being published the previous year.

There is a nice sequence of the 1997 picnic, including Howard’s arrest, in the Undercurrents film Grassroots.

When the book first came out Howard’s publisher sent him on the road to promote it, something Howard was more than a little apprehensive about.

The usual format was Howard reading some excerpts from the book, a Q&A then queue up to get him to sign your book.

As he got more confident it turned into his one man show ‘An Audience with Mr Nice’, an evening of readings, random reminiscences, one liners and rabble rousing rebellion, oh, and live dope smoking on stage, always a massive crowd pleaser.

It got to the point when you couldn’t help bumping into the guy at one event or another.

I remember sitting on the hill overlooking the Pyramid stage at Glastonbury one sunny afternoon and not noticing a figure shuffling onto the stage in the distance.

Howard had famously been described as sounding like Richard Burton and looking like a Rolling Stone – “I wish it was the other way round” he’d say.

The voice continued, “I have been asked to come out here to ask you not to piss in the hedge. You see, it all drains into the stream and kills the fishes, and we haven’t come here to kill the fishes”.

The crowd turned their heads. ‘That’s Howard Marks’, ‘Where?’, ‘There, on the stage’. People stood up to get a better look, at Glastonbury he was a man who needed no introduction.

I’m sure there are fishes in Somerset who owe their lives to Howard.

In 2009 they made a film of Mr Nice staring Howard’s mate and fellow Welshman Rhys Ifans.

By December the film was in the can and due for release in the New Year. Howard was booked at The Cellars in Eastney to do a small warm up gig before his upcoming tour. We booked the front two rows for our firms Christmas do.

At one point during the evening Howard showed us an unauthorised trailer for the film, it was cut to the Rolling Stones and Jimi Hendrix – music they would never get the rights to use but it was bloody brilliant and raised a huge cheer.

I spoke to him that night about how he would be remembered. I suggested that when this is all over, and the dust has settled, his legacy would be the autobiography Mr Nice and this movie. “I’m happy with that” he said.

Smuggler, scholar, stoner, cultural icon, legend, to me he was all these but I just knew him as Howard, and I will miss him.