Sinclair with two fellow members of a radical arts collective in Detroit decided to do just that.

As Minister for Information for the White Panthers it was John who released a communiqué on 1st November 1968 announcing a ten point programme for the group.

The first point was to adopt the ten point programme of the Black Panthers. The second point announced their intention to launch ‘An assault on the culture by any means necessary, including Rock and Roll, dope and fucking in the streets’. 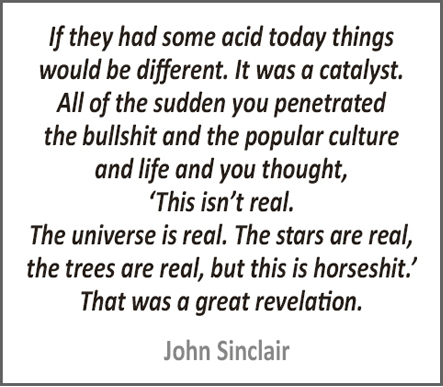 It was this statement that became the most well-known, and most often quoted of the White Panther programme.

Other points included the abolition of money, freedom for all prisoners and conscripted soldiers and ‘everything free for everybody’.

Even compared to the revolutionary political discourse of the time this was off the scale. However, all of this must be seen as emanating from a group of hippies that were permanently stoned and often tripping their tits off, and it’s clear that at times the acid got the upper hand. Years later John Sinclair said that it was impossible to approach their programme without a sense of humour.

Not noted for their sense of humour, or perspective, the Feds targeted the group. Hoover’s FBI tapped their phones and give them grief at every opportunity. “We were harassed 24/7, busted for incitement, obscenity, possession, whatever they could throw at us.”

After being set up by an undercover narc in 1969 John Sinclair was busted for two joints of weed and got ten years. 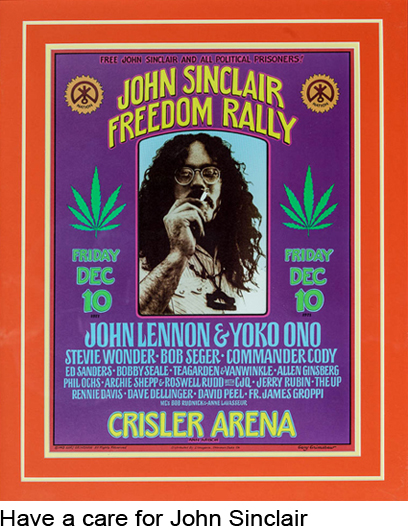 In 1971 John Lennon, Yoko Ono, Stevie Wonder and Bob Seger were among artists headlining a benefit gig for John and to raise consciousness of his plight. Lennon penned a song ‘Have a Care for John Sinclair’, which included the line: They gave him ten for two, what more can the bastards do?

The White Panthers regarded rock and roll bands as the vanguard of the revolution, travelling the country turning kids on to the programme and fostering rebellion. John Sinclair himself was the manager of the MC5, credited with being and one of the first heavy rock bands and precursors for punk.

The MC5 had limited commercial success (Kick Out the Jams being their most well-known hit) but are one of those bands regularly credited as being influential and ground breaking.

John Sinclair has lived in Amsterdam for many years publishing poetry and continuing to be an advocate for Marijuana law reform. Linking up with Dutch breeders Ceres Seeds, a range of cannabis strains were released using John Sinclair’s name and are available from Freedom Seeds.