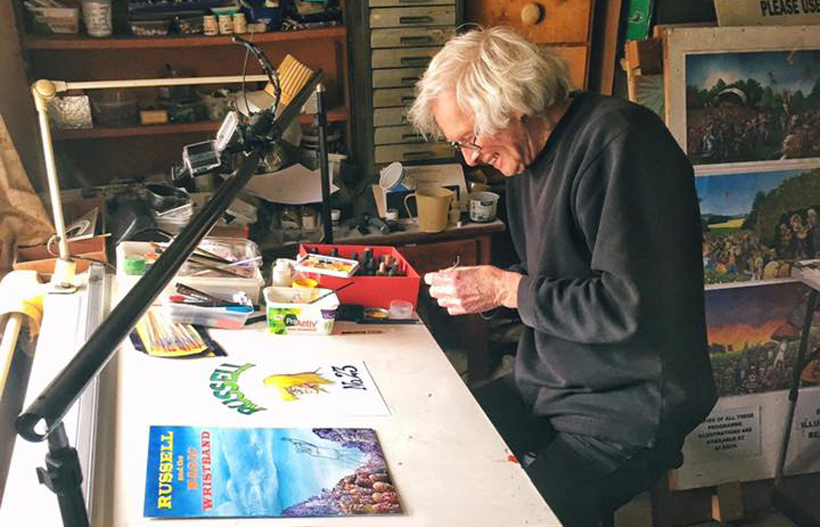 You and cannabis, how did you first meet? Was it love at first sight?

I was 15 or 16, at a party, in 1959. I really only knew one other person there and I was probably the youngest guest. At the time I had just discovered what would have to be the nastiest drink ever, a three to one ratio of Cider and Gin, which seemed to have gained a briefly fashionable notoriety. Well, it was brief with me. I wondered drunkenly into the garden where I got into conversation with a guy who, for some reason I was led to believe was from Sierra Leone. Well, to my fascination, he rolled a generous mixture of tobacco and other vegetable matter in a tobacco leaf and lit it. I threw up. Lots. It put me off Cider for years and Gin for decades. So, it was love at second sight. Years later I discovered that what I had shared with that guy was a blunt.

How do you think Russell is going to feel when he finds out we’ve named a strain of weed after him? 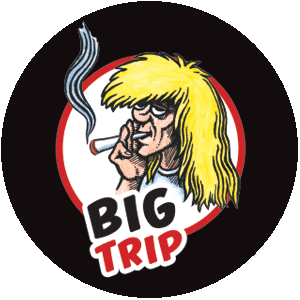 Paranoid. He’ll certainly want to find a really good hiding place for his stash,  and then forget where it is.

Do you find it interesting that many creative people like pot? Do you have any theories on why?

Well, I suppose it’s fairly interesting, if indeed it’s true. Trouble is ‘creative’ isn’t a particularly objective adjective. But leaving that aside, and not knowing whether anyone’s ever done any serious research on it, I do still see a connection. Of course it could just be a compensation thing that pot is an equaliser that helps non-creative folk catch up with the naturally creative ones, but I’d rather not believe that if I can avoid it…but I can’t deny that some of us owe our most imaginative ideas to it.

What music are you listening to at the moment that you would like to recommend?

Like any unfashionable old fart I cling not only to the album, but also to the now derided CD, so I can easily list what I’ve been playing from the pile building up beside me! Few surprises here today, “Outlaw” from the Alabama 3, Dreadzone’s “Dread Times”, Dhafer Youssef’s “Digital Prophecy”, FOS Brothers “Without Reason”, “new Sound Experience” from Out of Phase (Is this the best album ever? Discuss) and, as I write this, “Rude Mechanicals” from Pitch Black, the New Zealand outfit, not one of the several bands bearing that name in the US. If you don’t know these guys I think you should remedy that. But recently my most played album is “Where All the Seeds are Sown” by Windslide, who you probably won’t have heard of if you don’t live in the West Country. My wife bought the CD from the band when they were busking in Barnstaple High Street and gave it to me as in inspired substitute for a Christmas card, but that’s not the only reason I’ve played it so much. Track them down online and give yourself a treat, as they say…Reading this it’s obvious I learnt my style from the late John Peel…

Is dope stronger now than it was in the old days, or is that just propaganda?

Dunno…it’s sometimes different, but then my metabolism’s weaker. I can remember Temple Balls in the late sixties that provided a visit to paradise, tis true, but perhaps my brain was more receptive then. And in the seventies a friend made an acquisitive pilgrimage through the Atlas Mountains looking for the best solid ever, and even if it wasn’t, it had a way of turning the world inside out and taking you with it. Interesting stuff, as was the Manali that a guy I knew was smuggling over many borders and which felt like world peace, but on a smaller scale.

Frankly I suspect that every age and place ends up with its own chosen pot, and I fear at the moment we’ve got that skunky consumer product that suits an indoor society of bedroom dwelling screen addicts. And of course what distinguishes one strain from another has more to do with chemistry than strength, which really isn’t so crucial, nice though it can be. If it isn’t strong enough for you, just ingest more. It’s certainly true that the “authorities” (the what?!) love to use the strength card to damn the chosen pot of the young. This is a great nudge, nudge, wink, wink card. Hey there, old people, this is not the benign stuff you remember from your mildly mis-spent youth, this is a bad, indeed evil drug that robs your grandchildren of their sanity and intelligence and threatens the basis of society and blah, blah, blah….

Do you think your experiences with cannabis has taken your mind to places it would not otherwise have gone? 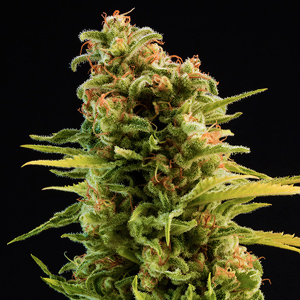 Certainly. But not just my mind. It also took me on plenty of physical journeys through unexpected landscapes, and left me sitting in rooms of improbable squalor or fascinating charm, in the company of dodgy or very boring or utterly wonderful people I might never have encountered otherwise. And those were just the shopping trips. Other times, of course, it just kept me from leaving the house.

But, yes, I think I can safely say I would never have produced comics for adults, so-called, without the stuff. But I suppose any recreational drug worth the name does that mind altering thing one way or another, although in my fairly limited experience some of the others take the mind to very small dark places that smell of despair, while others take it to places that don’t stay still long enough for you to know what the fucks going on. Pick any frowned upon substance, from pot to potcheen, or crystal meth to methylated spirit, they all take you to funny places, mentally, physically, spiritually, socially, morally, financially, and, in some cases, terminally. But even being drug free can do most of those. Life’s full of surprise, even without drugs, and nice though cannabis may be it really isn’t the answer to life, the universe and everything. If you start thinking like that (and there have been times when I’ve been guilty of that childish misconception!) you really need to get out more. And leave your stash behind.

If you found yourself with twenty quid to donate to a good cause, who would you pick?

Well, twenty quid doesn’t go far these days, so perhaps I’d cut out the middle man and simply give it to the first homeless person I saw…If you’re homeless twenty pounds can make a serious difference to your well-being, but if you choose to squander it in some disgraceful way that would outrage the average Daily Mail reader, that would be nice too.

As an artist and underground cartoonist do you have any advice for mankind?

Grow up and stop fucking about? Treat love as a verb, not a noun? Vote Labour?

How about – Don’t take advice from artists or underground cartoonists?

To be honest I don’t think my generation’s record is good enough to inspire confidence in our advice. In fact I’m not at all sure the generation you’d want advice from has been born yet. Or ever will be. You’ll just have to hope. But even that sounds like advice, so it’s probably best ignored….